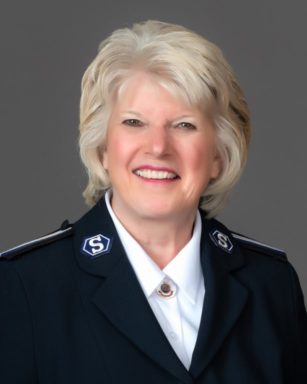 Anita Cocker Hunt grew up in Cleveland in a musical family where her father played cornet and her mother played piano. Anita studied trumpet with Alois Hruby and Harry Herforth, both members of the Cleveland Orchestra. She graduated from The University of Cincinnati College Conservatory of Music with a double degree in Music Education and Trumpet Performance, studying with Marie Speziale.
After coming back to Cleveland, Anita taught High School Band and Orchestra for five years, and then became the Divisional Music Director for The Salvation Army in Northeast Ohio. Other responsibilities included Private Trumpet Instructor at the Cleveland Music School Settlement, Bandmaster of the Northeast Ohio Youth Band, which traveled throughout the USA, and playing in the Cleveland Women’s Symphony.
Anita has been an instructor, for over 40 years, at the famous advanced Star Lake Musicamp, where she has conducted bands, taught the conducting class, and the Leadership Training Course. This past summer (2019), Anita was inducted into the prestigious Star Lake Musicamp Hall Of Fame.
One of the highlights in Cleveland was leading The Salvation Army Band in the parade, and playing in the street corner sextet around the fire, in the classic movie, “A Christmas Story”. All the Christmas music you hear in the background is actually us playing! We were frozen!
Anita returned to Cincinnati to become the Divisional Music Director for the Southwest Ohio and Northeast Kentucky Division of The Salvation Army.
During this time she completed her Masters of Music in Instrumental Wind Conducting, studying with Eugene Migliaro Corporon, at the Cincinnati College Conservatory of Music.

She was a founding member and conductor for 25 years of the award winning Cincinnati Brass Band. Honors include five first places in their respective sections at the NABBA Competitions, performances at The Great American Brass Band Festival, and performances with the Cincinnati Pops and the Cincinnati Symphony Orchestra under Erich Kunzel.
Mayor John Cranley of Cincinnati sent a proclamation of recognition for her service to the community and “Proclaimed July 11, 2017, as Anita Cocker Hunt Day in Cincinnati.’

Since 1996, she’s been active on the North American Brass Band Board of Directors, served as President for three terms (2001 – 2007), and in 2013, received the “President’s Award” from NABBA for her contribution in brass band activities and The Salvation Army.
Anita returned to teach High School as the Band director for the excellent Pendleton County HS Concert Band, and later as a Music School Specialist for Buddy Roger’s Music in Cincinnati.

In 2007, she re-assumed the position as the Divisional Music Director in Southwest Ohio and Northeast Kentucky.
Other activities include conducting the professional, all-women Athena Brass Band, and guest conductor from 2006 to 2019 of the brass band at the International Music Camp at the International Peace Gardens.
Since 2006 she has been on the Adjunct Faculty at Indiana University Southeast as Associate Conductor of the Commonwealth Brass Band.